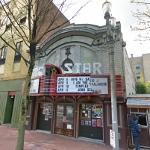 The Star is notable in Portland history for the City of Portland v. Tidyman Oregon Supreme Court ruling which established the state’s free speech protections. The owners of The Star had been indicted on charges of pornography for the adult movies and printed material (this was obviously before the Internet put most of these places out of business anyway). This Oregon Supreme Court ruling established that in general, bans on most "adult" material violated free speech laws.

Today, after extensive renovation, The Star is once again a burlesque house as well as a venue for live music.
Links: www.startheaterportland.com, law.justia.com, en.wikipedia.org
332 views