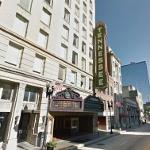 By jbottero @ 2015-05-24 21:50:44
@ 35.964243, -83.917683
Knoxville, Tennessee (TN), US
The Tennessee Theater opened on October 1, 1928 as a movie palace, built in the spectacular Moorish-Spanish style. It is said to be the grandest theater ever built in Knoxville, featuring terrazzo marble from Italy, Czech crystal chandeliers, handwoven carpeting and draperies, and museum quality artwork displayed all over the theater. Closed in 1979, it did however reopen in 1980, and was refurbished in time for the World’s Fair in 1982. The Tennessee is today used for classic movie screenings, stage shows, concerts, and other performing arts uses including including the Knoxville Symphony Orchestra, the Knoxville Opera Company and the Appalachian Ballet. On June 1, 2003, the Tennessee closed to undergo a $23.5 restoration, and was reopened in January 2005.
Links: www.tennesseetheatre.com, en.wikipedia.org
582 views