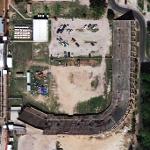 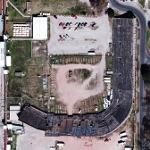 By jbottero @ 2013-11-17 12:37:53
@ 30.7216, -95.544893
Huntsville, Texas (TX), US
The Texas Prison Rodeo was launched in 1931 during the depression years, being first held at the baseball park outside the "Walls" Unit. The baseball park, located on the east side of the prison, was normally home to the Walls Tigers baseball team. The rodeo was the brainchild of Lee Simmons, General Manager of the Texas Prison System.

The last rodeo was held on October 26, 1986. The fans, including several hundred inmates were entertained by the mother and daughter duo, The Judds. Following the day’s performances, the chute gates were closed for good. Due to costly renovations that the prison system said were necessary to the arena stands, the rodeo was shut down after 1986.
Links: www.txprisonmuseum.org
687 views