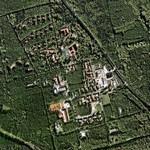 It was about two square kilometers in size and off-limits up to the German reunification. Because of geographical proximity to Wandlitz the area was colloquially called Wandlitz among general populace as a synonym for the Waldsiedlung, or sometimes Volvograd after the Swedish cars used by East Germany's political elite.

The area actually has always belonged to the city of Bernau. Waldsiedlung was built between 1958 to 1960 according to resolution of the SED Politbüro and was subordinated to the head department of protection of individuals of the Ministry for public security (Stasi). The members of the Politburo could be secured in Waldsiedlung better than in the mansions at Berlin-Pankow's Majakowskiring. A major cause of the settlement plans was fear generated by the Hungarian Revolution of 1956.

The area perimeter wasn't immediately recognizable from the outside. The outer ring consisted of a wire mesh fence, on which there were signs signifying a 'game research area'. The inner ring, which was however enclosed by the outer ring only partially, was surrounded with a two meter high green safeguard wall and could be entered only with special identification document. Three of the four gates were guarded by soldiers of the MfS and fourth by the Felix Dzerzhinsky Watch Regiment. 31 posts of the watch regiment secured from the inside the approx. 5 km long wall.

Waldsiedlung consisted in the inner ring of 23 single family houses with in each case 180 square meters surface area. There was among other things a swimming pool, a club house with cinema and restaurant, a sales office, in which beside high-quality products from GDR also western goods could be bought in a limited fashion in exchange for GDR currency, a market garden, a health center, a pistol shooting range, a sports field with tennis facilities as well as social building for employees and guard staff. From 1970s on there was a four lane motorway connection to Berlin.

In the era of Erich Honecker the cooks were required to produce Gourmet-level offerings. In addition to GDR food of highest quality also some products were imported such as Beaujolais and Seltzer water from West Berlin. An assortment of staff took care of all aspects of daily living.

In late 1989 the inhabitants had to leave the settlement according to the resolution of the GDR government under Prime Minister Hans Modrow. Since 1990 a rehabilitation clinic has occupied the area.
Links: en.wikipedia.org
888 views