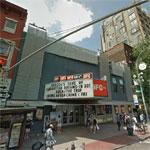 The Waverly was also known as the original home of the midnight audience-participation screenings of the movie version of The Rocky Horror Picture Show, which ran there for many years, spawning similar showings in other cities.
Links: en.wikipedia.org
417 views