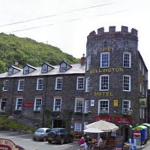 By kkeps @ 2010-10-31 17:27:33
@ 50.689453, -4.693183
Boscastle, United Kingdom (GB)
The Wellington Hotel, Boscastle's famous old coaching inn, has more than its fair share of ghostly inhabitants. Some years ago the Hotel's owner, Victor Tobutt, was working at the reception desk when the figure of a man drifted silently past him. Looking up, he was surprised to see that the man wore leather gaiters and boots, a frock coat and a frilled shirt, such as might have been worn by an 18th century coachman, and his hair tied back in the old fashioned style. "There was nothing insubstantial about him", Victor told, "he looked remarkably solid." To his shock, the apparition disappeared through the wall, but when he began to describe what he had seen to one of his employees, the man completed the description for him. Apparently he too had seen the ghostly visitor on more than one occasion.
Links: www.connexions.co.uk
660 views