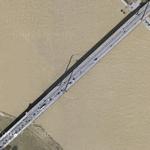 It was the first cable-stayed bridge built in Germany. Along with two other cable-stayed bridges to the south, the Oberkassel Bridge and the Knie Bridge, the Theodor Heuss Bridge forms the central leg of Düsseldorf's family of bridges over the Rhine.

The bridge carries Bundesstraße 7, downtown connector to Autobahn 52. Growing traffic volume in the bridge relaxed in May 2002 due to the opening of the Airport Bridge to the north
676 views