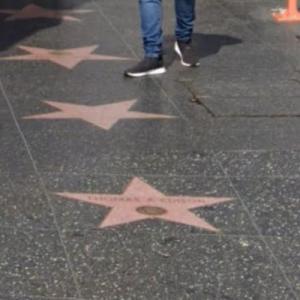 By kjfitz @ 2011-07-31 20:17:53
@ 34.101502, -118.336136
Hollywood, California (CA), US
Thomas Alva Edison (February 11, 1847 – October 18, 1931) was an American inventor, scientist, and businessman who developed many devices that greatly influenced life around the world, including the phonograph, the motion picture camera, and a long-lasting, practical electric light bulb. Dubbed "The Wizard of Menlo Park" (now Edison, New Jersey) by a newspaper reporter, he was one of the first inventors to apply the principles of mass production and large teamwork to the process of invention, and therefore is often credited with the creation of the first industrial research laboratory.
Links: en.wikipedia.org
839 views