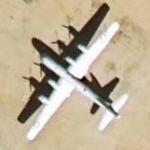 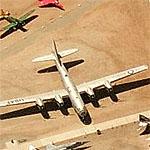 The long range bomber was introduced to the Air Force in 1940, but production was delayed to incorporate changes in armament and load. The first World War II B-29 raid was from specially designed bases in China on Japanese shipyards in Bangkok, Thailand in June 1944. The B-29’s were the first aircraft to bomb mainland Japan since Doolittle’s raid in 1942. The B-29 was not used in the European Theater of Operations due to the short flying distances.

The entire production of B-29s was commited to the Pacific Theater in an effort to crush the Japanese. Able to carry a bomb load of 20,000 lbs., B-29s flew from bases on Guam, Saipan and Tinian. The “Superfortresses’ bombed during the day and used incendiaries at night causing great fire storms in Tokyo, Kobe, Yokohama, and other target cities. The most destructive raid of World War II occurred when 334 B-29’s bombed Tokyo on 9-10 March 1945. 1.5 million people were left homeless and over 83,000 killed versus the 80,000 killed in Hiroshima and Nagasaki combined.

The most famous use of the B-29 “Superfortress” was on the 6th of August, 1945, when Colonel Paul Tibbets, piloting the B-29 “Enola Gay”, dropped the “Little Boy” atom bomb on the Japanese city of Hiroshima, killing 75,000 people in a matter of seconds. On the 9th of August, 1945, the Japanese unconditionally surrendered to the Allied Armies. Five years later, in July of 1950, war between North and South Korea broke out. Again, the “Superfortress’ was called upon to provide aerial support. The B-29 was the only US produced bomber flown by a foreign country (Great Britain) in post World War II.

The B-29 at the March Field Museum is an A model serial number 44-61669. It was delivered to the USAAF on 5 May 1945 at the Boeing facility in Renton, Washington. It was assigned to the 20th Air Force, 73rd Bomb Wing, 500th Bomb Group, 833rd Bomb Squadron flying combat missions out of Saipan. It carried the name “Flagship 500” and had a “Z-49” on its tail at the end of WWII. Its last USAF assignment was in 1956 with the 581st Air Resupply Group at Kadena Air Base, Okinawa. It was transferred as a TB-29A trainer to the US Navy on 18 March 1956. The aircraft was recovered from the Naval Test Center at China Lake, restored by a private organization, and flown from Daggett Field, Barstow, to March AFB in January, 1981 by MARC (Military Aircraft Restoration Corp.). This aircraft is on loan from the USAF.

From 1981 to 2003, our B-29 had the nose art of the “Mission Inn” painted on the starboard nose. This is the name of a famous hotel in neighboring Riverside, California, and was also the name applied to a former March Air Force Base - 22nd Bomb Wing “Superfortress” that served in the Korean War. When the museum’s B-29 (#44-61669) was recovered from the Gunnery ranges of the Naval Weapons Test Center - China Lake, California, in the mid 1970’s (it was flown to the March Field Museum in August 1981), its history was almost completely unknown. Because of the fact that there once was a B-29 stationed at March AFB with “Mission Inn” nose art, it seemed appropriate at the time (1981) to put that nose art on the museum’s B-29. But since learning of the airplane’s actual history in the 500th Bomb Group, including 11 combat missions during WWII, it is currently planned to restore her original paint scheme of Z49 with nose art --- Flagship “500”.