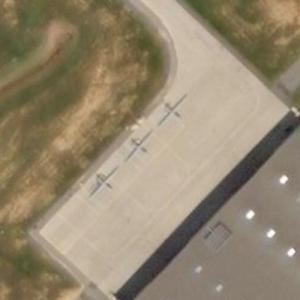 Also known as the "Screaming Eagles," the 101st Airborne Division is a specialized division of the US Army trained to execute air assault operations. They have been referred to as the most potent and tactically mobile of the US Army's divisions. In recent years, the 101st Airborne Division has increasingly participated in special operations abroad as part of the War on Terror.

It is unclear what the purpose of these 3 drones is. I am assuming these are MQ-1Cs because it was reported that the 160th Special Operations Aviation Regiment, which is based at Fort Campbell, KY, had received 12 Gray Eagles in 2012. I first asssumed these were MQ-1 Predators, because their wingspan is 50ft. MQ-1C Gray Eagles makes more sense, as I have not seen anything online that indicates any predators are being operated at Fort Campbell, just gray eagles.
Links: arstechnica.com, en.wikipedia.org
409 views