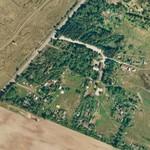 By Dania @ 2009-06-29 06:34:09
@ 57.06862, 8.937421
Thisted, Denmark (DK)
Thylejren also called "Frøstrup camp" began in summer 1970, the first festival in Denmark. Association for the festival the New Society had found a piece of land in between Thy Frøstrup and Østerild to organize a festival that was inspired by Woodstock. The idea for Thylejren came from Jacob Ludvigsen and Lasse Ellegaard, they gave the idea to Henning Kløvedal Prince and Leif Varmark [1]. As you can see historically, there has been much since then. From being a place you like summer camp to a place with residents who would return to the wild, primitive living, and until the middle eighties, even without power.

Thylejren is a haven in the sense that it creates life, life activity, complications, developments. It has space for leaning existences, imaginative artists, caring mothers and fathers, shaman, women and horses and much more. It is both part of Denmark and the society we are all part of and it reported out of the unconscious forbrugerræs and interview kitchen culture.

Thylejren owned by the association "The New Society" which is organized through the General Assembly (every year, 21.8. Kl.13.00) as a senior decision-making authority, that is not a board or a president. Decisions shall be taken in consensus, but also vote. Thylejren is a social experiment in its 38 year.
Links: da.wikipedia.org
1,970 views