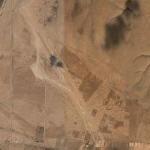 By bubaonline @ 2009-03-04 07:07:24
@ 32.095809, 23.839731
Tobruk, Libya (LY)
At the beginning of World War II, Libya was an Italian colony and Tobruk became the site of important battles between the Allies and Axis powers. Tobruk was strategically important to the conquest of Eastern Libya, then the province of Cyrenaica, for several reasons. ... Finally, fifteen miles south of the port was the largest airfield in eastern Libya. This was significant due to the importance of air power in desert warfare.