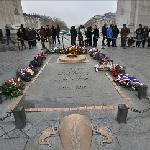 A ceremony is held Tomb of the Unknown Soldier every 11 November on the anniversary of the armistice signed between France and Germany in 1918. It was originally decided on 12 November 1919 to bury the unknown soldier's remains in the Panthéon, but a public letter-writing campaign led to the decision to bury him beneath the Arc de Triomphe. The coffin was put in the chapel on the first floor of the Arc on 10 November 1920, and put in its final resting place on 28 January 1921. The slab on top carries the inscription ICI REPOSE UN SOLDAT FRANÇAIS MORT POUR LA PATRIE 1914–1918 ("Here lies a French soldier who died for the fatherland 1914–1918").
Links: en.wikipedia.org
373 views