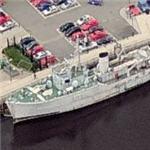 The Ton class were coastal minesweepers built for the Royal Navy and South African Navy in the 1950s. They were intended to meet the threat of seabed mines laid in shallow coastal waters, rivers, ports and harbours, a task for which the existing ocean-going minesweepers of the Algerine class were not suited.

The class numbered 119 vessels. They were diesel powered vessels of 440 tons displacement fully laden, constructed of wood and other non-ferromagnetic materials. Their small displacement and shallow draft gave them some protection against pressure and contact mines, and allowed them to navigate in shallow inshore waters. Armament was one 40 mm Bofors gun. Sweeping equipment was provided for moored mines and magnetic mines. Thornycroft & Co of Southampton was the lead shipyard for the class.

It was originally planned to name the ships after insects, with names like Red Ant, Green Cockchafer and so on, but this plan was abandoned and the Royal Navy ships of the class were given names of British towns and villages ending in "-ton", hence the name of the class.

With the rundown of the Royal Navy fleet in the 1960s many were sent to become base ships for the Royal Naval Reserve allowing reserve crews to get to sea for short periods without a lot of effort to organise a crew of significant size. Some of these had their names changed to reflect the RNR Division they were attached to.

The RNR vessels lasted until the introduction of the River class minesweepers in 1984. The remainder of the RN ships paid off in the 1990s.
Links: www.kellington.net
1,725 views