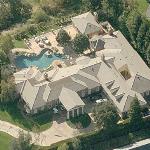 Dean McDermott is a Canadian-American actor best known in the United States for having married Victoria Davey "Tori" Spelling, with whom he appeared in the observational documentary shows Tori & Dean: Inn Love and Tori & Dean: Home Sweet Hollywood, and for having acted out the role of Constable Renfield Turnbull on the TV series Due South.

Spelling and McDermott are renting this home in the Sherwood Country Club in Westlake Village, CA. The couple put their Malibu, CA home on the market in April 2012 after purchasing it just 5 months prior.
Links: en.wikipedia.org
6,241 views