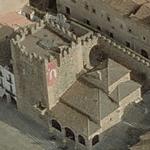 Also known as the "New Tower" or "Watch Tower", its most popular name derives from the Calif Abu-ya-gub. This slender (25 mtrs tall) tower is next to the Peace Hermitage which was originally built in the 16th century and reconstructed in the baroque style in the 18th century
506 views