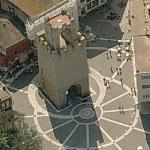 The imposing work was made necessary due to the continuous invasions and pillages that the city was subject to since the beginning of the XIII century. The structure foresaw the cinta muraria (approximately 2.7 hectares) equipped with about thirty towers along the entire perimeter of the city and interrupted only in the two points of access by: Porta Ponti (bridges door - called in this manner because it led to the bridge over the Tirso river) and Porta Mari (Sea door - that took its name from the road that led towards the sea), which were protected by two imposing towers - that of St. Christopher and that of St. Philip.

The monument is on three floors. The first allowed access to the walls, the second housed the capstans that had the function of lifting the great portcullis portal, the third – on which a second body was built – gave access to a terrace protected by Guelphic battlements that, together with the loopholes located on the walls of the two previous floors, played a fundamental defensive role.

Within the walls were built churches such as those of St. Clara (1343), the cathedral (XII century), St. Francis (XIII century), monasteries and civil buildings.
771 views