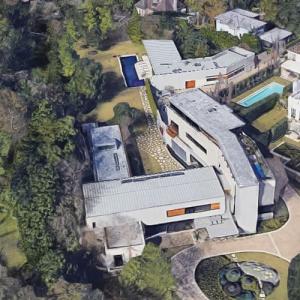 Scott and girlfriend Kylie Jenner stayed at this house under 24-security during the aftermath of the Astroworld Festival in November, 2021. During Scott’s performance at the festival, a crowd rush occurred which resulted in the deaths of at least nine people and injuring many more. Protestors have gathered at the Houston residence and legal proceedings are underway.

Travis Scott’s net worth is $60 million. He earns around $40 million per year between record sales, concert revenue, and various endorsements.

Scott was born in Houston, Texas and moved to nearby Missouri City at the age of six. He attended the University of Texas San Antonio, but dropped out to pursue his musical career. His first studio album “Rodeo” debuted at number three on the Billboard 200 and featured guest appearances from Kanye West, The Weeknd, and Justin Bieber. His second album “Birds in the Trap Sing McKnight” reached number one on the charts. He has been nominated for several Grammy awards including Best Rap Album in 2019.

Scott began dating reality television personality and entrepreneur Kylie Jenner in April 2017. They split up in September 2019, but got back together during the COVID-19 pandemic. They have one daughter and are expecting a second child.
Links: en.wikipedia.org, www.dirt.com, www.dailymail.co.uk, www.velvetropes.com, www.celebritynetworth.com
5,083 views