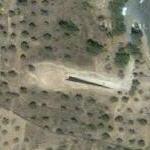 By kjfitz @ 2010-02-04 09:48:00
@ 37.726754, 22.753447
Mykines, Greece (GR)
The Treasury of Atreus or Tomb of Agamemnon is an impressive "tholos" tomb at Mycenae, Greece (on the Panagitsa Hill) constructed around 1250 BCE. The lintel stone above the doorway weighs 120 tons. The tomb was used for an unknown period of time. Mentioned by Pausanias, it was still visible in 1879 when the archeologist German Heinrich Schliemann discovered the shaft graves under the 'agora' in the Acropolis at Mycenae.

The tomb perhaps held the remains of the sovereign who completed the reconstruction of the fortress or one of his successors. The grave is in the style of the other tholoi of the Mycenaean World, of which there are nine in total around the citadel of Mycenae and five more in the Argolid. However, in its monumental shape and grandeur it is one of the most impressive monuments surviving from Mycenaean Greece.
Links: en.wikipedia.org
767 views