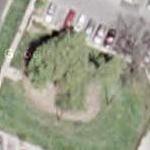 Treaty Oak is by far the most famous tree in Austin. This 500 year old giant was once one of fourteen trees referred to by local Indians as the Council Oaks. Treaty Oak in particular was revered by both the Commaches and Tonkowas. Legend states that it was under this tree that Stephen F. Austin signed a treaty with the Indians from which its name was derived. This majestic tree once sported a 127 foot spread and was considered to be the finest example of a mature oak in the world. In 1929 the tree was added to the American Forestry Association's compilation of famous and historic U.S. trees.

Over the years the Council Oaks were cut down one by one until only Treaty Oak remained. The city of Austin purchased the tiny lot on which Treaty Oak stands in 1937, saving it from planned destruction. The tree that exists today is a shadow of its former self, thanks to a deranged person who tried to poison the tree in 1989. An extensive effort to save Treaty Oak was a success, but at a cost of sacrificing almost two thirds of its canopy. The tree continues to recover however and in 1997 produced its first acorns since the poisoning.
Links: www.austinexplorer.com
1,501 views