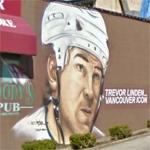 Linden played 1140 of his 1382 career regular season games with the Vancouver Canucks, a franchise record. His career began in 1988 with Vancouver, where he stayed until being traded to the New York Islanders in 1998. He was traded to Montreal in May 1999 and to Washington in March 2001.