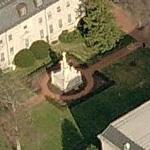 By WacoKidd110 @ 2011-05-28 04:45:33
@ 38.98324, -76.48767062
Annapolis, Maryland (MD), US
The oldest military monument in the United States honors heroes of the War against the Barbary Coast Pirates, the new republic's first war. In 1804, President Jefferson ordered the nation's tiny naval force to the Mediterranean to protect the expanding trade of the new United States against the pirates, who demanded ransom for safe passage of merchant ships. "Millions for defense, but not on cent for tribute" became the rallying cry for this war. Jefferson's action established the doctrine of extension of power overseas and created a permanent United States Navy.
Links: www.dcmemorials.com
646 views