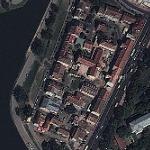 By Mike1989 @ 2013-01-19 07:55:20
@ 53.908396, 27.556651
Minsk, Belarus (BY)
Minsk’s old town, more commonly known as Troitskoe Predmestye (Trinity Suburb, or just Trinity) after the former Trinity Church that once stood in the area, is a slight misnomer in that it dates from just three decades ago. Built between 1982 and 1985 on the site of a former settlement dating from the 12th century, Trinity does at least offer a break from the sprawling concrete of the city centre. The birthplace of the Belarusian poet and journalist Maxim Bogdanovich, the area boasts a number of decent restaurants and bars, making it worth having a look round, especially during the summer.
Links: www.inyourpocket.com
466 views