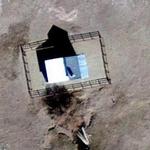 By Fab @ 2013-09-12 04:01:15
@ 37.733823, -105.736362
Mosca, Colorado (CO), US
The Trujillo Homestead is a historic ranch site in Mosca, Alamosa County, Colorado, not far from the Great Sand Dunes National Park. The area was first settled in the 1860s by Teofilo Trujillo, a Mexican sheep farmer. His son Pedro built a log cabin house beginning in 1879, along with other ranch outbuildings and structures. In 1902 the elder Trujillo's home was destroyed by fire during conflicts between English-speaking cattle ranchers and the Spanish Trujillos, who were by then major landowners in the area. The Trujillos sold their holdings, which became part the Medeno Zapata Ranch, now owned by the Nature Conservancy. The homestead area, including the surviving homestead and the ruins of the destroyed one, was declared a National Historic Landmark District in February 2012.
Links: en.wikipedia.org
475 views