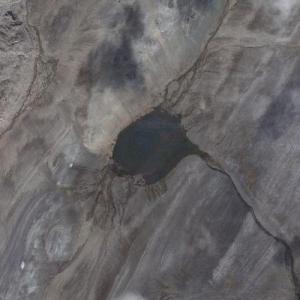 Anonymous
@ 2021-07-24 07:12:43
Okay people let's be logical humans here. There's obviously going to be a Crater underneath the largest explosion ever created by Man. So unless you've actually walked to the coordinates, think googles lying, or are under the assumption that standing directly underneath THE MF CZAR BOMBA was the safest place to be for miles around.... Then let's just assume it's a Crater. And you can see "That little pond" from space, so put some respect on it.

Anonymous
@ 2022-02-02 18:24:46
Tsar Bomba did not make a crater. It was an air burst bomb detonated roughly ~15,000 ft above ground level. While the blast caused great destruction, it had little effect on the surrounding bedrock. The fireball never even reached the ground as the shock wave from the blast reflected off of the earth and prevented the fireball from reaching the surface. Search YouTube for "50 Megaton Tsar Bomba Declassified • Ivan RDS-220 Hydrogen Bomb" to view before and after footage.

Anonymous
@ 2022-04-05 22:54:19
I've been here for photography, can confirm there is a crater here. People trying to be logical but actually sound stupid in this comment sections. Am I the only one who knows physics here?

Anonymous
@ 2022-08-25 19:40:13
Even if it detonated 3 miles above the surface, it registered as roughly 5 on the Richter scale. The shockwave was able to be measured on its third time around the planet. The fireball didnt hit the surface because the shockwave was so strong that it blew it upwards. No crater lol? Sorry, but thats gonna leave a mark...in this case a huge one.