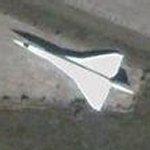 By gamma @ 2008-03-24 13:07:53
@ 55.569671, 38.156183
Ramenskoye, Russian Federation (RU)
In the early 1990s, a wealthy businesswoman, Judith DePaul, and her company IBP Aerospace negotiated an agreement with Tupolev and NASA, (also Rockwell and later Boeing). They offered a Tu-144 as a testbed for its High Speed Commercial Research program, intended to design a second-generation supersonic jetliner called the High Speed Civil Transport. In 1995, Tu-144D [reg 77114] built in 1981 (but with only 82 hours and 40 minutes total flight time) was taken out of storage and after extensive modification at a total cost of US$350 million was designated the Tu-144LL (where LL is an abbreviation for Flying Laboratory). It made a total of 27 flights in 1996 and 1997. In 1999, though regarded as a technical success, the project was cancelled for lack of funding.

The Tu-144LL was reportedly sold in June 2001 for $11 million via online auction, but the plane did not sell after all — Tejavia reported in September 2003 that the deal was not signed. The replacement Kuznetsov NK-321 engines (from the Tupolev Tu-160 bomber) are military hardware and the Russian government did not allow them to be exported.

At the 2005 - Moscow Air & Space Show TEJAVIA founder Randall Stephens found the Kuznetsov NK-321 engine on display, and the Tu-144LL rusting on Tupolev's test base at the Gromov Flight Test Center. In late 2003, with the retirement of Concorde, there was renewed interest from several wealthy individuals who wanted to use the Tu-144LL for a transatlantic record attempt; but Stephens advised them of the high cost of a flight readiness overhaul even if military authorities would authorize the use of NK-321 engines outside Russian Federation airspace.

The last two production aircraft remain at the Tupolev production plant in Zhukovsky, reg 77114 and 77115. In March 2006, it was announced that these airframes had been sold for scrap. Later that year, however, it was reported that both aircraft would instead be preserved. One of them could be erected to a pedestal near Zhukovsky City Council and TsAGI.

"Used in a joint project with NASA and wearing small Boeing titles":