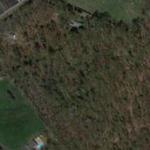 By kkeps @ 2014-01-10 17:13:25
@ 40.41611, -75.99138
Leesport, Pennsylvania (PA), US
TWA Flight 513, registration NC86513, Star of Lisbon, was a Lockheed L-049 Constellation operated by Transcontinental and Western Air on a training flight on July 11, 1946 when it crashed near Reading, Pennsylvania. Electrical wiring in the baggage compartment arced, starting a fire. The smoke and intense fire created made it impossible for the pilots to maintain control of the aircraft. Of the six crewmembers aboard, five were killed. This accident is memorable for grounding all Lockheed Constellations from July 12 until August 23, 1946 when cargo fire detection equipment could be installed.

The crash was referred to in Martin Scorsese's film The Aviator, based on the life of TWA's then-owner, Howard Hughes.
Links: en.wikipedia.org
736 views