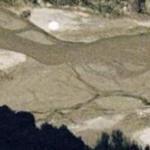 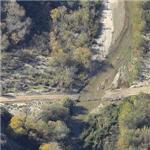 By kjfitz @ 2007-04-14 13:00:06
@ 34.418367, -118.635221
Santa Clarita, California (CA), US
The making of the movie had consequences that overshadowed the film itself. During the filming of a segment directed by John Landis on July 23, 1982, actor Vic Morrow and child actors Myca Dinh Le (age 7) and Renee Shin-Yi Chen (age 6) died in an accident involving a helicopter being used on the set. The helicopter was flying at an altitude of only 25 feet, too low to avoid the explosions of the pyrotechnics used on set. When the blasts severed the tail rotor, it spun out of control and crashed, decapitating Morrow and one of the children with its blades. The other child was crushed to death as the helicopter crashed. Everyone inside the helicopter was unharmed.

The accident led to legal action against the filmmakers that lasted nearly a decade, and changed the regulations involving children working on movie sets at night and during special effects-heavy scenes. Hollywood also avoided helicopter-related stunts for many years, until the CGI revolution of the 90s made it possible to use digital versions. As a result of the accident, one second assistant director had his name removed from the credits and replaced with the pseudonymous Alan Smithee. The incident also ended the friendship between director Landis and producer Spielberg, who was already angered before the accident that Landis violated many codes, including using live ammunition on the set.
Links: en.wikipedia.org
5,368 views