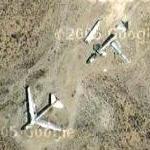 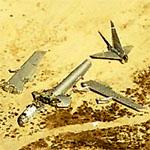 The other is B-52E-55BW (Serial Number 57-0119) which was loaned to General Electric for engine tests in the 60s and it now in three pieces just off the lake bed. This particular 'Buff' was used to test the General Electric TF-39 for the Lockheed C-5A "Galaxy" program. The TF-39 was mounted on the right inboard engine pylon in place of the two J57s normally installed.

Then in 1991, the Strategic Arms Reduction Treaty (START) put into motion a reduction in the number of "Strategic Nuclear Delivery Vehicles." As part of complying with this treaty, the U.S. began the task of destroying over 350 B-52s. C, D, E, F and G model B-52s have been destroyed. H models are still part of the Air Force fleet and the venerable B-52 will probably set longevity records as it continues to serve far into the future. The START treaty also called for verification by "National Technical Means," e.g. satellite. The B-52s being destroyed are chopped into sections and left sitting for 90 days so that Russian and Ukrainian satellites can verify the number being destroyed.

However, one day a photo interpreter in the former Soviet Union noticed the "strategic weapons" ready for activation at a moments notice on the edge of an active U.S. Air Force Base. Little did they know the real condition of either aircraft. The Russians insisted that according to treaty, one of the B-52's had to be rendered inoperable. So, one day some lucky guys from Edwards AFB got to blow up their first B-52 (the unlucky 0119). After placing some high explosive in the fuselage (and perhaps running like hell) the B-52 was rendered inoperable to the satisfaction of the Russians. [check-six.com]
Links: www.check-six.com
9,101 views

badmuther
@ 2013-05-28 20:13:26
My friends and I used to camp in that B-52 as teenagers. We'd sneek on the base and pull a truck up to one end of the bombay doors creating a perfect windbreak for a bonfire. Good Times. There used to be an old tank not too far from there.