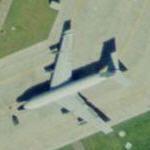 The RC-135V/W sensor suite allows the mission crew to detect, identify and geolocate signals throughout the electromagnetic spectrum. The mission crew can then forward gathered information in a variety of formats to a wide range of consumers via Rivet Joint's extensive communications suite. The interior seats 34 people, including the cockpit crew, electronic warfare officers, intelligence operators and airborne systems engineers. All Rivet Joint airframe and mission systems modifications are performed by L-3 Communications in Greenville, Texas, under the oversight of the Air Force Materiel Command.

Under the "BIG SAFARI" program name, RC-135Vs were upgraded from the RC-135C "Big Team" configuration, itself a mission modified RC-135B (the first version delivered). The difference between the original and upgraded RC-135Vs and Ws is the different engines used.
Links: en.wikipedia.org
721 views