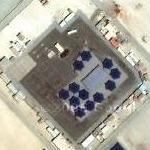 The facility includes a 25 meter pool, under the canopy amidst the blue umbrellas, an international phone center, game room, souveneir shops, and food stalls.

This facility replaced the much maligned Sand Pit, originally located directly across the basin from the new, improved facility. The Sand Pit was notorious for the vast amounts of beer consumed during carrier visits. It was not uncommon for an aircraft carrier crew to blow through THOUSANDS of cases of beer in a matter of a few days.
3,787 views