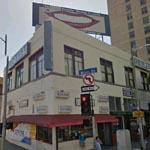 The band attracted over 1,000 people during the video's filming, which took place on the rooftop of the Republic Liquor Store (now Margarita's Place, a Mexican restaurant)

The band's performance on a rooftop in a public place was a reference to The Beatles' final concert, as depicted in the film Let It Be.
Links: en.wikipedia.org, www.youtube.com
2,081 views