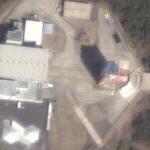 This space center was established in Uchinoura (now Kimotsuki), Kagoshima prefecture, in 1962 as part of the Institute of Industrial Science, University of Tokyo, when the original facility in Iwaki (now Yuri-Honjo), Akita prefecture, was closed down. In 1964, the space center became part of the Institute of Space and Aeronautical Science, University of Tokyo; in 1981 it became an independent research facility, the Kagoshima Space Center (KSC), attached to the Institute of Space and Astronautical Science (ISAS). Its name was changed to the Uchinoura Space Center (USC) when the Japan Aerospace Exploration Agency (JAXA) was formed.

More than 360 rockets and 23 satellites and probes have been launched from the Kagoshima Space Center since Japan’s first satellite, "Osumi," was launched in 1970. Tanegashima Space Center (TNSC) launches satellites for weather, broadcasting, and communications, while the USC’s main launches are for scientific purposes, such as astronomical survey satellites and planetary probes. These satellites and probes--AKEBONO, YOHKOH, GEOTAIL, HALCA, NOZOMI, and HAYABUSA--are currently on their missions. Also, sounding rockets, such as the S-310 and the S-510, have been launched to conduct research on the middle atmosphere and on space plasma.

Moreover, 20-meter and 30-meter antennas receive telemetry from satellites to track and control them while in the earth’s orbit. The 34-meter antenna can backup the 64-meter deep-space antenna at the Usuda Deep Space Center.
Links: global.jaxa.jp
946 views