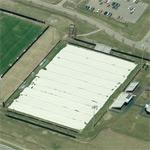 The stadium, which opened in late 1996, is part of a complex that houses a game field, a practice field, locker rooms and a training room. Since its opening, the Complex has played host to some of the largest crowds to see MAC and C-USA soccer action, including the 1998 MAC Tournament. UK also hosted the 1999 and 2001 MAC Championship games, which the Wildcats won to earn an automatic bid to the NCAA Tournament. The first round of the 2003 NCAA Tournament was played in front of more than 1,500 fans as UK advanced over Cincinnati in penalty kicks in a thrilling finish. In 2007, UK welcomed 2,307 fans for a rivalry game with Louisville and a year later, UK welcomed 1,988 fans for a 2-1 win over Michigan.
Links: ukathletics.com
801 views