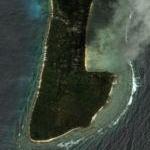 Ukiangong Point was fired upon by the USS Nautilus shortly after 7 AM on August 17, 1942, after the submarine had dropped Lieutenant Colonel Evans F. Carlson's Marine Raiders for their approach to Little Makin as part of the Makin Raid. Later in the war, the capture of Ukiangong point was an early objective in the U.S. Army's assault on Butaritari on November 20, 1943.
Links: en.wikipedia.org
671 views