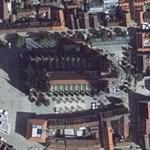 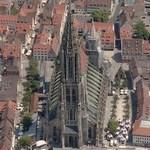 By DonMartini @ 2006-05-04 15:38:49
@ 48.398487, 9.993042
Ulm, Germany (DE)
Ulm Münster is a cathedral and the tallest church in the world, its steeple measuring 161.53 m (530') high and containing 768 steps. Located in Ulm, Germany, it is an outstanding example of Gothic ecclesiastical architecture. It has dominated Ulm and the surrounding region for hundreds of years with its 161-metre-tall spire. After climbing the 768 steps to the top there is superb panoramic view of Baden-Württemberg's Ulm and Bavaria's Neu-Ulm and, in the right weather conditions, a vista of the Alpine range from Säntis to the Zugspitze.

This architectural masterpiece houses many famous artworks. The 15th century choir stalls by Jörg Syrlin the Elder enjoy world-wide acclaim, in particular the carved busts which have gone down as masterpieces in the history of art. Among the other works of distinction in the Münster are Hans Multscher's Man of Sorrows on the main portal and the pulpit canopy by Jörg Syrlin the Younger, as well as the altar and window in the chancel.

Work on the Ulm Citizen's Church began in 1377, financed by the city's inhabitants. There was then a very long period with no further building, even when the church became protestant during the reformation. The building was finally completed in 1890 with the addition of the spire.
Links: en.wikipedia.org
976 views