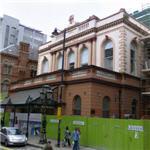 By kjfitz @ 2010-04-18 11:31:17
@ 54.59441, -5.931298
Belfast, United Kingdom (GB)
The Ulster Hall is a concert hall and grade B1 listed building in Belfast, Northern Ireland. Situated on Bedford Street in Belfast city centre, the hall hosts concerts, classical recitals, craft fairs and political party conferences. Despite the opening of larger concert halls in the city, such as the Waterfront Hall and the Odyssey, the Ulster Hall has remained a very popular venue, and is considered to evoke much more atmosphere than the newer venues.
Links: en.wikipedia.org
766 views