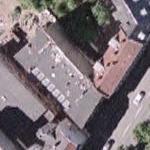 By alfjon @ 2007-03-05 08:42:00
@ 55.693866, 12.547846
Copenhagen, Denmark (DK)
Ungdomshuset (literally "the Youth House") was the attributed name of a building located in Copenhagen on Jagtvej 69, Nørrebro, which functioned as an underground scene venue for music and rendezvous point for varying anarchist and leftist groups from 1982 until 2007. Due to the persistence of the municipal government of Copenhagen and the activists who have occupied it, however, the building has been at the centre of intense debate since the mid-1990s.