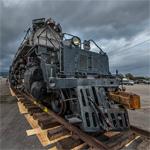 It was donated to the Railway & Locomotive Historical Society in 1961. In 2013, Union Pacific reacquired the locomotive with plans to restore it to operational condition. Once it returns to service, it will become the world's largest operational steam locomotive.
Links: en.wikipedia.org
568 views