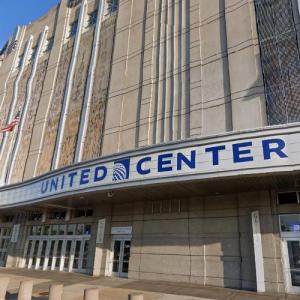 By Matheus_ @ 2012-01-03 10:06:29
@ 41.881363, -87.674195
Chicago, Illinois (IL), US
The United Center is an indoor sports arena located in Chicago. It is named after its corporate sponsor, United Airlines. The United Center is home to both the Chicago Bulls of the National Basketball Association (NBA) and the Chicago Blackhawks of the National Hockey League. The plan to build the arena was created by the late Bill Wirtz and Jerry Reinsdorf, the owners of the two sports teams. The United Center's predecessor was the indoor Chicago Stadium, the original "Madhouse on Madison", which was demolished after the newer arena opened for business on August 18, 1994. The east side of the stadium features statues of Michael Jordan (known as "The Spirit"), Bobby Hull and Stan Mikita, while a statue of various Blackhawks sits to the north on Madison Street, where the Chicago Stadium was located. United Airlines pays about $1.8 million per year until 2014 for its naming rights. United merged with Continental Airlines in October 2010, retaining the latter's logo and corporate look. The stadium continued to use United's previous logo for the duration of the 2010-11 season. For the 2011-12 season, all the previous United signs were updated with the new logo. Two new lit signs on the east and west ends of the arena saying "United Center" with the new United logo in the middle was revealed below the upper level suites complimenting the "Madhouse" signs on the north and south sides.
Links: en.wikipedia.org
1,541 views