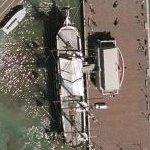 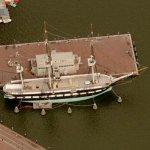 By kjfitz @ 2005-08-25 13:34:27
@ 39.28556494, -76.61115309
Baltimore, Maryland (MD), US
Constellation bears the same name as the famous frigate of 1797 which was broken up at the same time this ship was being built. Constellation's first duty assignment was interdicting the slave trade off the coast of Africa. She captured two slavers and released the imprisoned slaves. At the outbreak of the Civil War, she made the first Union Navy capture, overpowering Triton, a slaver brig in coastal waters off Africa. She then spent two years on the Mediterranean station attempting to capture the Confederate commerce raider Sumter. She also served briefly with Farragut's Gulf Blockading Squadron.

After the war she saw various duties, carrying famine relief stores to Ireland and carrying precious American works of art to the Paris Exposition of 1895. She was used extensively as a training ship for Naval Academy midshipmen. During World War II, she served as relief flagship for the Admiral of the Atlantic Fleet. She is the last existing Civil War era naval vessel and the last sail-powered warship built by the U.S. Navy. She has been in Baltimore since 1955. A nine million dollar restoration project was completed in 1999.