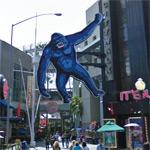 By neotrix @ 2009-12-08 13:18:08
@ 34.136399, -118.352773
Hollywood, California (CA), US
Universal CityWalk is the name given to the entertainment and retail districts located adjacent to the theme parks of Universal Parks & Resorts. Originating as an expansion of Universal's first park, Universal Studios Hollywood.

CityWalk's central plaza is topped by a large steel-web canopy with a leaping fountain below, created by WET. A huge television monitor brought in by Panasonic, is located above the multiplex, showing upcoming Universal movie releases, music videos, and NBC Universal promotions stands next to the giant guitar towering over the Hard Rock Cafe.
Links: www.citywalkhollywood.com
2,266 views