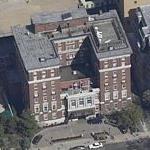 The Club grew over the ensuing years, but with the stock market crash in 1929, it found itself with its credit badly extended and an unsecured bank loan outstanding. As the Great Depression deepened, it was recommended that the Club sell the property at 900 Fifteenth Street and consolidate with the Racquet Club. The Racquet Club had also been having problems during this time, and, in a marriage of convenience in September of 1936, the two clubs joined forces. The Racquet Club's location at 1135 Sixteenth Street was kept, and the new club was known as the University Club of Washington, D.C.

The Club flourished during the 40's, with the rapid growth of this sleepy southern town into a major world capital. In preparation for its 50th Anniversary, an extensive renovation of the Club took place, including hanging its famous red wallpaper in the lobby and stairway.


During the ensuing years, the Club was a favorite residence for many members of Congress. Tip O'Neill preferred the old card room on the third floor and nothing pleased him more than relieving his House colleague, Richard Nixon, of his money at the poker table.

The 80's brought the admission of women as members and the commencement of a $2.5 million renovation of the Athletic Center.

The University Club draws members from all over the United States. Members hail from the private sector as well as all three branches of the Government. In addition to a rich tradition, there is ample good fellowship at the "mansion on Sixteenth Street." As one member states: "It is a nice retreat from the every day pace of Washington; it is a great place to get away to read, to relax, to reflect, to work out, and to catch up with good friends."
Links: www.universityclubdc.com
781 views