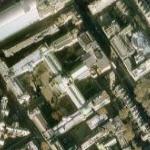 By kjfitz @ 2011-01-01 14:36:57
@ 51.524727, -0.133713
London, United Kingdom (GB)
University College London (UCL) is a public research university located in London, United Kingdom and the largest constituent college of the federal University of London. Founded in 1826, UCL was the first university institution to be founded in London and the first in England to be established on an entirely secular basis, to admit students regardless of their religion and to admit women on equal terms with men. UCL became one of the two founding colleges of the University of London in 1836.
Links: en.wikipedia.org
501 views