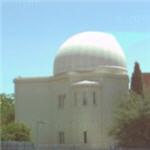 By kjfitz @ 2007-10-10 11:02:37
@ 32.233813, -110.949057
Tucson, Arizona (AZ), US
The University of Arizona's Steward Observatory's main office is located on the University's campus and is closely tied to the Department of Astronomy. Established in 1916 by its first director, Andrew Ellicott Douglass, and a $60,000 bequest made by Lavinia Steward in memory of her late husband Henry B. Steward, the Steward Observatory now owns and operates the Multiple Mirror Telescope, Mount Graham International Observatory and a number of other major optical and sub-millimetre telescopes at several sites in the state, such as on Kitt Peak, Mount Hopkins and Mount Lemmon.

Steward Observatory includes several large research groups. The Center for Astronomical Adaptive Optics is at the forefront of developments in adaptive optics. The infrared group built the NICMOS instrument for the Hubble Space Telescope and the MIPS instrument for the Spitzer Space Telescope. In addition, Steward's Mirror Laboratory, located on the east side of Arizona Stadium, has pioneered new techniques of large mirror production, including spin-casting lightweight, honeycomb mirrors. The Mirror Laboratory completed the second mirror for the Large Binocular Telescope in September, 2005. The Mirror Lab is currently building a prototype off-axis 8.4 meter mirror for the proposed Giant Magellan Telescope; the GMT design calls for 7 mirrors, 6 of them off-axis, creating an effective aperture of 21.4 meter.
Links: en.wikipedia.org
1,033 views