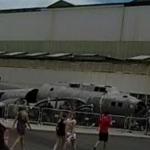 The aircraft was rediscovered in 1972 in Agaiambo swamp, where it earned the nickname Swamp Ghost. It was salvaged in 2006.

The Swamp Ghost was received by the Pacific Aviation Museum in Pearl Harbor on April 10, 2013.As of August 2013, the museum plans to restore the aircraft for static display in Hangar 79 on Ford Island.
Links: en.wikipedia.org
1,033 views