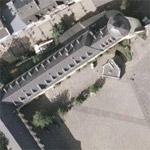 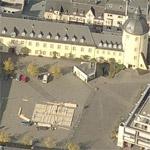 By neotrix @ 2007-08-27 16:43:26
@ 50.874136, 8.021759
Siegen, Germany (DE)
Late in the 17th century, the Lower Stately Home came into being in its current form, somewhat like an open rectangle. The Evangelical line of the House of Nassau-Siegen resided here. Also belonging to the Schloss is the "Dicker Turm", or "Fat Tower" with a carillon. In 1959, the then town of Siegen built a memorial for victims of war and tyranny. Inside the Schloss is also found the crypt of the Evangelical branch of the Nassau princely house.

Today, the Schloss serves as a state authority building in which the North Rhine-Westphalia Building and Property Establishment, the State Environment Office, the Office for Occupational Health and Safety and the Attendorn Correctional Facility (Siegen Branch Facility) are all housed. By the city's plans, a university is supposed to move into the Unteres Schloss within the next few years, but at this time, the plan is failing to find any financial backing.
Links: en.wikipedia.org
496 views