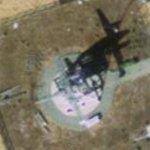 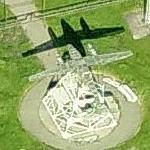 This site is located at the end of Morrison Canyon Road in Alameda County, Ca. While the site has 24 and 7 security, I don't believe the area is intended to be very secret or secure. Occasionally the site will get mentioned in the local press, but ESL provides no information on the mission of the site. The land next to the site is now owned by the East Bay Regional Park District, so the days of this site being out of the public eye are numbered.

The mystery of the upside-down wire mesh airplane has been cleared up by Vern Modeland ( http://www.runningriver.com/modeland ). There was some speculation that the wire mesh airplane was a radar target, but the more likely scenario is that the plane is used to test antennas. The wire mesh airplane acts as a ground plane, which can influence the antenna radiation pattern. The goal is to measure the radiation pattern aimed downward from the airplane. If the plane were not upside-down, then the antenna would radiate towards the ground, which would be difficult to measure as there would be reflections from the ground. By mounting the airplane upside-down, the measurements are made from above, where there is little chance of reflections.

The shape of the plane is similar to the RC-12 Guardrail, and was probably used to test the antenna radiation pattern. You can find more information on Guardrail at http://www.fas.org/irp/program/collect/guardrail.htm .

Anonymous
@ 2009-04-24 00:24:24
I have been there many times at night and have never even seen anybody around. Yes the lights were on in the trailers, but no-one ever came out.
We used to drive right up to the fence and stop.