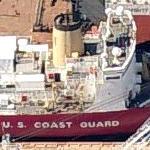 The Polar Class icebreakers are two of the largest cutters operated by the Coast Guard. These cutters, specifically designed for open-water icebreaking have reinforced hulls, special icebreaking bows, and a system that allows rapid shifting of ballast to increase the effectiveness of their icebreaking. The Polar Sea and Polar Star were built in the 1970s. They serve in Arctic/Antarctic serving science and research as well as providing supplies to remote stations. Both Polar Class icebreakers are under the control of Pacific Area, Ice Operations Section.
Links: www.uscg.mil
3,159 views