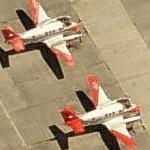 The T-44A Pegasus was a trainer version, designated the Model H90 by Beechcraft, used to train United States Navy and Air Force pilots to fly multi-engine turboprop aircraft such as the P-3 Orion and the C-130 Hercules. A total of 61 were delivered to the US Navy between 1977 and 1980. In August 2006, the Navy announced, after 29 years of operation, the T-44A fleet would be upgraded with modernized avionics systems, and redesignated T-44Cs.
Links: en.wikipedia.org
2,541 views